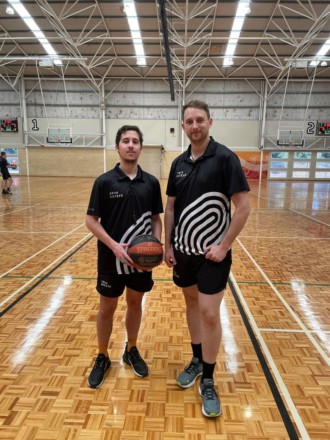 Check out what the umpires have to say for this seasons finalists!

Fusion
Fusion have had a very strong season, finishing first on the ladder with 17 wins. The team will be looking to use their strong defensive pressure to force their opponents to turn the ball over and intercept their passes.

Ballers
The Ballers finished third on the ladder but should not be underestimated come finals. The team uses and impressive display of skill when in possession of the ball and can score fast.

Safety Netters
Fourth place finishers with a strong defence, allowing the second least goals scored against them in their division. The safety netters are should not be underestimated.

Blackberries
The Blackberries are very social but also very competitive. The GD contests every ball no matter what the score is. The shooting circle is also strong with lots of strong movements to lose the defenders. This team is very easy to have a laugh on and off the court.

Pitch slap
Pitch Slap are very social while being competitive. This team has strong long-range GS who never misses a goal.

Jetz:
This team is very supportive to each other and very competitive. The GS never misses a goal while both defensive players are very strong gaining lots of intercepts. The shooters work extremely well together, and the ball is rarely turned over.

Squad Goals:
Third place finishers on the ladder, the Squad Goals can score in big ways, having scored the second most in their division. The team will be looking to continue that through finals while using good defensive pressure to force turnovers.

Avengers:
Second place finishers on the ladder, The Avengers allowed the least number of goals scored on them this season. The Avengers can force teams to make mistakes and intercept the ball often, turning into effective offence.

Nets top model:
They work well together as a team. They started with a limited knowledge about the game of netball and now is one of the most competitive teams in the competition. Both the shooters work well working it into circle and finishing it off with a goal. They are also strong in the defensive end with the GD intercepting most of the lobs thrown into the circle.

Redskins:
They are one of the new teams to the competition and one of the most competitive. They are always up for a laugh on the court. There shooter end is very talented with the GA barley missing a goal and a very strong knowledge of netball. The GK has an amazing hold and is very consistent and barely gets called for obstruction.

Crushers:
This team is very competitive as being a social team. They have improved so much since starting with us. GS has a strong knowledge of netball and knows how to work space along with working with the GA. Their centre court always contests the ball no matter the score

Carlton Dry:
Carlton Dry have been leading from the front all season, displaying incredible skill all over the court. Defenders need to defend this team from deep with Carlton Dry making it rain all season and looking to continue that through finals

Saints:
The Saints have used great teamwork and familiarity with one another to secure the 4th spot for A grade finals. A very fast paced team who rebound incredibly with their taller players who are always creating second chance points

Statesmen:
The Statesmen have been using their athleticism to push the tempo in games and challenge teams to match it. The Statesmen are a consistent finals team who are looking to add another trophy to their cabinets.

Nets:
The Nets work better as a team than any other in the division who will score a big percentage of their points in the key and along the baseline. A team that pushed the team in tempo will be looking to start off fast in finals.

Legacy:
Legacy are a strong team with athletic bigs who can throw down dunks and score points in a fast way. Legacy work well as a team and can beat any team on their best day.

Badgers:
The badgers are looking to finish off what they couldn’t in their last season and are looking poised to do so. A very consistent team who can score from anywhere on their court and clamp up their opposition on the defensive end.

The Prophets:
The Prophets made a late surge with their skilled transition offence to secure a comfortable position for finals. The Prophets are looking to keep the ball rolling into finals but will need to start with the defensive end as they have allowed more points than they have scored.

Bazzo Bombers:
The Bazzo Bombers can score big points with the second and third efforts on the offensive rebounds. They will be looking to keep their form with a big part of their offence coming from deep shot attempts at a high efficiency.

Palms Sweaty:
The defending champs who finished comfortably out in front. The team works very well together and everyone contributes to their wins. Palms Sweaty will be looking to keep their efficiency from the 3 point line in the finals.

Tradies Champs:
The big-bodied Tradies Champs can beat any team on their best day. The team always leaves all their effort on the court and rebounds the ball very well. They will be looking to turn their effort into fast points with second and third chance baskets.

Hot Garbage:
A team that shouldn’t be underestimated come finals, Hot Garbage will be looking to take home the trophies with regular contribution from all players in their team. Their taller players rebound well and fins their guards in transition for quick points.

The Benchwarmers:
The best defensive team in the division, The Benchwarmers will be looking to take home the trophies as they have before. A fast tempo team who can hurt you from the 3-point line off of forces turnovers

Crabs:
First place finishers on the ladder and the most goals scored by a team, the crabs are looking to take home the trophies this season with their fast offensive scoring and defensive efforts.

Below Average:
Second place finishers and best defensive team, largely due to their keeper who very rarely lets one past him. Below Average are looking to finish what they came so close to last season and take home the trophies.

Miracles Can Happen:
Third place finishers who can beat any team on their best day. Miracles can happen will be looking to generate some effective offence in the finals early and put pressure on their opposition. As the name suggests, miracles can happen.

Perth Defenders:
Fourth place finishers with a very good display of skill between the team. A strong defensive team as the name would suggest, allowing the third least goals scored in their division.

The kids needing something to do for the end of the school holidays? Enrol them into our fun Multi-Sports Carnival ...

The kids itching to get back into Basketball these school holidays? Enrol them in our Swan Active Basketball Clinic ...

Back to all articles

Keep up with the latest events, programs and members stories by following our Swan Active Facebook pages